How to Add Caption to Image in Google Docs

Hi. Today, we will learn how to add caption to image in Google Docs. When working with Google Docs, we need images to add to our textual content, when we make blog content on Google Docs, we need to have the images, or making a YouTube documentary script we need images. So, simply we can’t run away from images. We need them in almost all cases. Now, adding an image to Google Docs is not a difficult thing in itself. But we should also know about the image attributes and properties that are needed to deliver the message of the picture or to store the meta-text about the image, or the alternative text. Today, we are going to learn many ways to add caption to our images in Google Docs. In simple words, captions are image subtitles. They describe the image within 2-5 words. Such as an image of a lion with the caption written: “Lion in a forest” is perfectly valid as a caption. So, let’s move ahead and see why we need to learn how to add caption to image in Google Docs.

Importance of adding Caption to Image in Google Docs

When we work with mathematics or physics projects on the docs, we need to add so many diagrams on it to explain the textual content. Physics subject is incomplete without the labeled diagram. We need to add images, and mostly to refer readers we use image captions to tell them the image reference, you must have seen figure 2.3 written below images in the book, they refer the reader and make sure that the reader reading section 2.3 can acknowledge that the figure for this section is also captioned with the section number which is 2.3.

How to Add Caption to Image in Google Docs

Here, we will learn all the methods and workarounds to add caption to image in Google Docs. We will see step-by-step procedures for each method with easy explanations and screenshots. So, let’s start with the first method.

First, go to insert, then click on the image > pick any source to upload an image Image is added to Google Docs, now select the image On the left bottom, you will see some options appearing Click on the first option Inline, you will get the feature name by hovering over the button. After clicking on inline, now place your cursor after the image and start writing your text (caption). Now adjust the line spacing to place the caption right after the image, keep it centered align, and style italic to make it look like a caption.

This is how you can add caption to image in Google Docs using this inline image method. Here you have a blank canvas to start drawing Firstly, click on the image button and import your image Now below the image add a textbox Write the image caption inside the text box Adjust the text box position by holding and dragging with the mouse, making it perfect to look like the caption to the above image. Once you’re done click on the Close and Save button This is how to add caption to an image using the drawing method in Google Docs.

Add Caption to Image in Google Docs – Using a Table

In this section, we will see another method to add caption to image in Google Docs. We have seen two easy methods, but for any reason, if they did not work for you, you can use the table method. Here we draw a 1×2 table and then keep our image in the first row and caption in the second and then we hide the overall table, this way we make an image and text below it look like an image caption. Let’s see this method with a step-by-step procedure. Now in the first row place your cursor at the beginning Go to Insert > Image > select a source and import your image In the second row, write down your image caption text 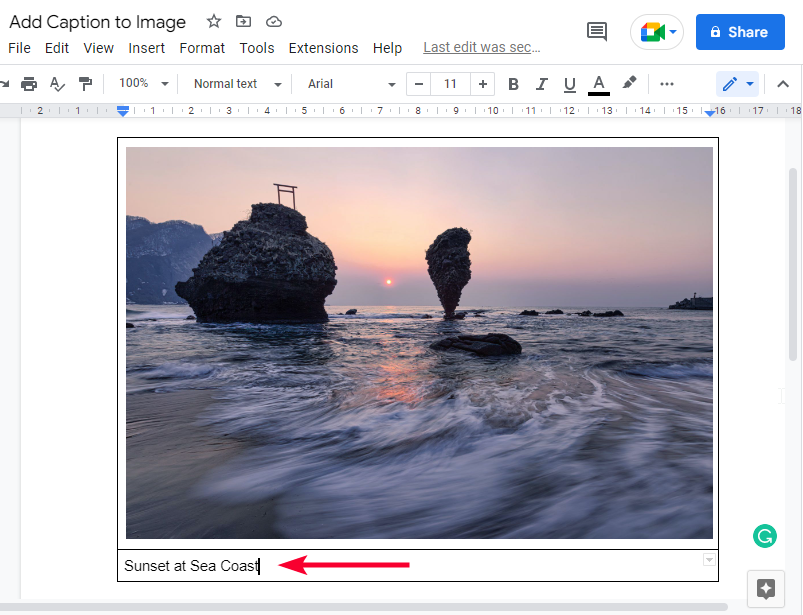 Now right-click on the table and go to table properties This is how to add caption to image in Google Docs using the table method.

It’s your preference if you want to use a third-party add-on to add caption to image in Google Docs, then I suggest Caption maker.

This add-on is used to automatically caption to your tables and images in the entire document. You have so many customization options and settings for the caption of your table and images once you set all the things right then all your images and tables will be got an automatic caption.

See also  How to Highlight Text in Google Docs (2 Methods)

What is the difference between alt text and caption?

Alt text is an alternative text to an image or table or any graphical object on your document or the web. Alternative text is the text which is shown when for any reason the image, graph, or chart is not loaded. For instance, when the internet connection is slow, and the images are not loaded properly on the page, then for the unloaded images the alternative text will appear which will tell a user about the image, or what’s inside the image. Alternative text only appears when the image is not appearing, if the image is appearing then there is no need for the alt text. While the caption is something else, the caption is visible every time with the image and tells a short meta information of the image, such as an image having some mountainy view, then the caption can be like “Beautiful mountains”.  The caption can also be used for reference purposes, such as for table, table 2.1, diagram 12.5, and so on.

So, today we learned various methods on how to add caption in Google Docs. We have seen three individual methods to caption the images in Google Docs. Lastly, I also mentioned a free Add-on for Google Docs to add auto-captions to your tables and images with so many settings and controls. I tried to cover all the methods in the easiest way possible. I hope you find the above guide helpful. I will see you soon with another useful article. Keep learning with Office Demy.

How to Make a Calendar in Google Docs

How to Print Envelope in Google Docs [Best Practice]

How to Track Changes in Google Docs [2 Methods]

How to Alphabetize in Google Docs (3 Methods)

How to Find and Replace in Google Docs

How to Print Double Sided on Google Docs (2 Methods)

How to Connect Data Sources in Google Data Studio