How to Do Roman Numerals on Google Docs (Best Practice)

In this article, we will learn how we can type and put roman numerals on Google docs. Let’s start with the introduction of roman numerals.

“A unique kind of number system used by the Romans in the past is known as “Roman Numerals”.

There are seven Roman numbers I V X L C D and M which were being used between 900BC and 800 BC. There was a need to develop a common method of counting for trading and communication purposes. So the Roman numbers were developed. No doubt the roman number is an obsolete number system; we can’t deny its significance in this ultramodern world. We need to use Roman numbers in our daily business life so we should know how to do Roman numbers in Google docs.

If you are interested to learn about how you can Wrap Text in Google Docs, please read the article below.

How to Wrap Text in Google Docs (Best Practice)

How to Do Roman Numerals on Google Docs step by step

Follow the simple and easy steps given below to do Roman numerals on Google docs.

Go to Google docs and open a new blank document. Click on the insert option at the left top. When you will click on it a drop-down menu will appear. Now you have to click on the special character’s option, available in this menu. A new pop-up will appear containing different signs and characters. At the right side a search bar will be available, use this search bar to find the Roman characters of your need. You can select the Roman numeral of your need from the table of Roman Numerals to add it in the Google docs. OR use the blank space available below the Search bar to draw the shape of a specific character. The symbols you draw on the space will appear on the left side. It’s also a quick way to reach the roman numeral of your choice, very quickly. Click on the Roman Character of your choice from the table to add it to the Google docs. How to Add Roman Numerals as Bullet Points in Google Docs

Select the Roman Number option from the appearing list. (available on 5th option). 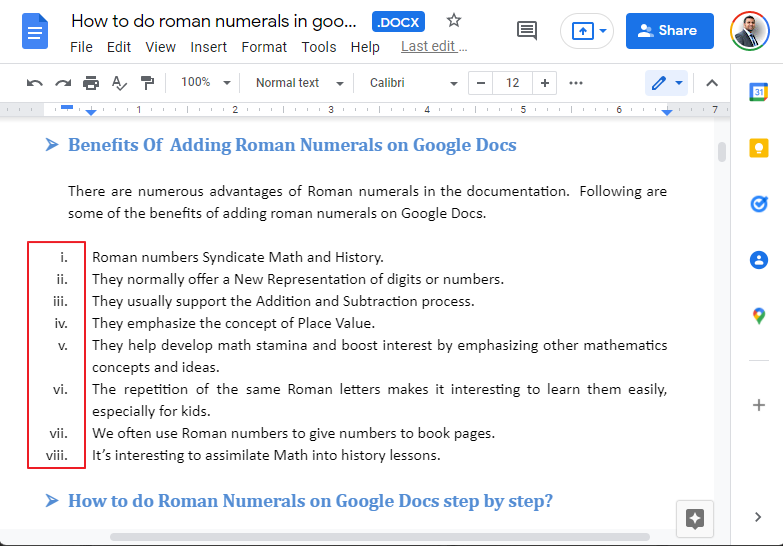 You can also use some shortcut keys available for quick action while adding Roman numerals in the Google docs for example:

Once you have followed all the given simple and steps, you will be able to:

Hello! My name is KS Alam. I am a technical writer who shares step-by-step document processing software tutorials and writing tips for the real world problem solving on OfficeDemy.com. By profession I am a RF Engineer and Software Developer.

How to Make a Calendar in Google Docs

How to Print Envelope in Google Docs [Best Practice]

How to Track Changes in Google Docs [2 Methods]

How to Show and Hide/Remove Gridlines in Google Sheets

How to use DIVIDE Function in Google Sheets [User Guide]

How to Make Organizational Chart Template in Google Sheets

How to Get Answers on Google Forms [4 Methods]