Importance of Merging Cells in Google Sheets Without Losing Data

If your Google Sheets contains important information or data and you don’t want to lose it when you need to merge multiple cells in Google Sheets, you should read this article and take advantage of it. If you start doing this task manually it will consume a lot of your time and energy. So, I will tell you simple formulas that you can use to merge multiple cells into one. It will make your work very easy and interesting. This function can be applied to both horizontal and vertical cells. It will become easy to sort out data nicely from multiple strands.

Therefore, there are several ways discussed in this article that teach you how to merge cells in Google Sheets without losing data. So let me quickly move you toward its step-by-step procedure.

How to Merge Cells in Google Sheets Without Losing Data

Here we have a table containing a couple of columns with some data in both, let’s merge them. To merge them without losing data you will have to choose an individual separate cell where you can merge them with data. As I have placed the cursor in the following picture. First, we will write an equal sign for all functions, then give the cell address of the first cell that you want to merge. Then give the cell address of the second cell that you want to meet the first one.

As I told how simple is that you are almost done, just press “Enter” to get the results As you can see from the results below in the picture the data of both cells have been merged into one cell.

Have you noticed there was not any space between the data “A10” because this pattern merges the cell’s data without spacing? If you want to add space then the pattern will be as follows After the “&” sign, you will need to write inverted commas with space to give the space between the data of both cells. Once you have written the inverted commas then again you will have to write the “&” sign and then the cell address of the 2nd cell. This is the pattern of writing this function to give the space between the data of both cells. Similarly, you can add more things between both cell data like dash sign and any other symbol you require with the same pattern. As you can see in the following picture. As you can see the results now. You can get the data with any kind of separation if needed For more results just drag the cursor over the other rows by dragging the blue dot along the selection of cells. See also  How to Sort in Google Sheets (Complete Guide)

As I told you first, these both methods are almost the same in writing patterns. We will write the CONCATENATE function after the equal sign and then follow the same pattern above. This method is also so easy to apply so if you prefer this method to merge cells without losing data then there are the steps on how to merge cells in Google Sheets without losing data by CONCATENATE function

Here we have some data on first name and last name. We want to merge both cells to generate the full name. So, first, we locate the cursor where you want to merge the cells. Then we will write the function with an equal sign. Here we are using the CONCATENATE function to merge cells without losing data. After writing the function name, open the bracket and give the cell address of both cells and close the bracket as written in the following picture. So, to give the space between the first name and last name write the same above pattern, inverted commas between the cell addresses. Then just press “Enter” and you will get the results as shown below. Let’s suppose you have the data as follows: Names in the first column and the father’s name in the second column. Let’s write the full name with the help of CONCATENATE function. You can also write any reference as well between the cell addresses as I have used “S/o” to mention. Note: Note the above pattern carefully in every space and commas and inverted commas.

By pressing the “Enter” button you will get the following results which are very useful and helpful to you. Q: What is the purpose of merging cells in Google Sheets?

A: While working in Google Sheets you need to add titles or headings across the data, in which you may need to extend the cell space and adjust with the alignment of your data. In that case, we use merged cells in Google Sheets.

Q: What happens when we merged cells in Google Sheets?

A: Google sheet spreadsheet consists of cells which all are separated from one another. You cannot add any cell’s data to another. But if you merge both cells it will lose any one of the data. In other words, you can say one cell including text and formatting as well occupied the other cell’s place. In case we lose data of other cells when we merge cells in Google Sheets.

Q: Can we merge more than two cells in Google Sheets?

A: Yes you can add many cells together in Google Sheets. Just continue to follow the same above pattern and keep referencing the addresses they all will merge in one cell, doesn’t matter how many cells are there. There is an example of merging cells of more than two,

As we wrote the pattern in the above method continues with the “&” sign, it will merge all those cells as you can see below in the picture. I have added three cell addresses. In this way, you can add two or more cells in Google Sheets as the result below. 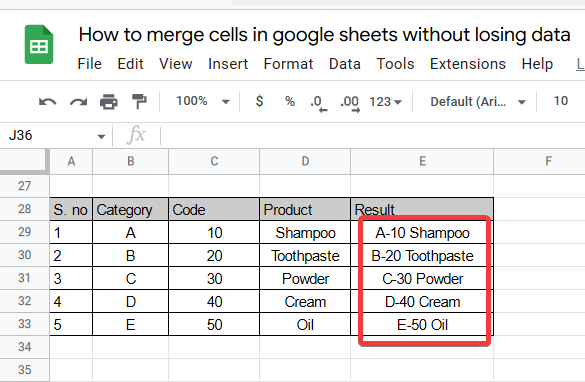 How to Add Grammarly to Google Docs [Complete Guide]

How to Rotate Text in Google Sheets [Complete Guide]

How to Insert Degree Symbol in Google Slides (3 Methods)

How to Download/Save an Image from Google Docs

How to Make a Gantt Chart in Google Sheets (Easy Guide)