How to use the PI Function in Google Sheets [With Examples]

In this article, we will learn how to use the PI function in google sheets. Pi is an important irrational number or you can say a mathematical constant used for many applications when working on math formulas, real numbers, and mainly when calculating the area of a circle.

Use Case of PI Function in Google Sheets

Google sheets are mainly about formulas, calculations, measurements, functions, and so on. We normally do not have a lot of plain text in google sheets, we have values based on formulas and further calculations that can be customized or can be used with any irrational numbers like PI.

How to use the PI Function in Google Sheets

From this section, we are going to learn the step-by-step procedure to master this function in google sheets using several examples and applications of the PI function let’s first start with the basics.

Here, we don’t have any arguments in the PI function. Because, it represents the constant value of PI which is 3.14, and can not be changed. So, remember not to pass any argument or value within the brackets. Or, you can add it from the insert tab by clicking Insert > Function > Math > PI Executing the empty PI function will give you the value of PI which is 3.14 (rounded) as you have seen above.

Now let’s move ahead and see some practical examples.

PI Function in Google Sheets – Calculation of a Circle

Calculating the Diameter of a Circle

Divide the circumference by π, or 3.14 for an estimation. The result is the circle’s diameter.

Let’s implement it in google sheets Apply the formula to calculate the diameter. Calculating the Circumference of a Circle

You can calculate the circumference when having the value of the diameter.

To calculate the circumference of a circle, multiply the diameter of the circle with π (pi). Applying the formula to find the circumference Calculating the Area of a Circle Applying the formula to find the Area 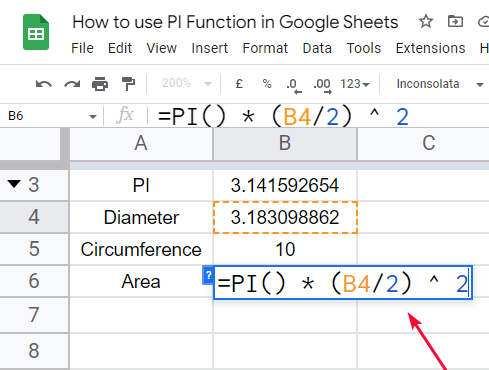 Hit Enter, and the result This is how simply we can use the PI function in google sheets to perform the calculation of the circle.

See also  How to Search in Google Sheets (Complete Guide)

You can simply copy the PI symbol from the internet and paste it into your cell in google sheets. This is a very easy method and most google sheets users use this method to bring PI and other special symbols to google sheets.

In the result, you will get the PI symbol anywhere on the page.

Select and copy it Paste into a cell on your google sheets file This is another method to type PI symbol in google sheets without the internet, sometimes you don’t have internet while working on google sheets, so this method is very helpful to add the symbol directly in sheets. Hit enter, and you have got the PI symbol on your sheet This is how you can add a PI symbol and even other special characters in google sheets using any of the above methods. I recommend the =CHAR method; it does not require internet and is very fast.

How to use the PI Function in Google Sheets

See also  How to Multiply in Google Sheets [Complete Guide]

From where we can use the PI function in google sheets?

What is the absolute value of PI?

We can not find the exact value of PI, since we can have a calculation to see the PI value in-depth. Normally the PI value is referred to as 3.14, but there can be so many numbers after the point.

The first 100 digits of the PI value are:

Where from PI come in mathematics?

Who invented the PI?

Pi is an old mathematical constant that was in the spotlight for around 4000 years. has been known for nearly 4,000 years and was found by the ancient Babylonians. (Babylon was the capital city of the ancient Babylonian Empire) Nearly unknown date between 1600 to 1900, Pi value as 3.125 by some mathematicians, later an Egyptian mathematician did research and found new things about PI and circle, then the thread carried on to 1800, and now today we have a standard value of PI which is 3.14

I hope you find this article helpful and that you have learned new things about the PI function. I will see you next time with another helpful article till then take care of yourself and your loved ones. Have a nice day. Thank you so much for reading. Keep learning with Office Demy.

How to Indent in Google Sheets [4 Methods]

How to Add a Border in Google Docs (4 Methods)

How to Add Calculated Fields in Google Sheets (Ultimate Guide)

How to Delete a Slide on Google Slides (4 Methods)