How to Put Fractions in Google Sheets [Guide 2022]

Google Sheets is typically used for spreadsheet collaboration across different users. Spreadsheet application enables users to create, edit and format spreadsheets online to organize and analyze information and process complicated numbers. Fractions are also part of complex numbers which is sometimes difficult to deal with in Google Sheets. A fraction has two parts, namely the numerator, and denominator. The number on the top is called the numerator, and the number on the bottom is called the denominator.

The numerator defines the number of equal parts taken, whereas the denominator defines the total number of equal parts in a whole. Although Google sheet is a smart spreadsheet tool, you may have trouble inserting fractions in Google Sheets as they can convert into dates. Directly entering the fractions in the Google Sheets can interrupt you to understand whether it is a regular fraction number or a simple text string. But you do have not to worry, this article is to get rid of all those problems. In this tutorial, we will learn several methods for how to put fractions in Google Sheets properly without error.

If you are working on any financial project consisting of numbers and figures. Sheets make it seamless for teams to work together. Easily add collaborators to projects, see changes as they occur, receive notifications for edits that happen while you’re away, and chat with colleagues in the same document. Fraction is also a basic function of math that is commonly used in spreadsheet applications. While making reports, bills, or any other document that has fraction values usually written in the format of the decimal point for example (1.2, 3.25, etc.). Sometimes you may not like this format and you need to put fractions in Google Sheets then you are right to the place.

If you are facing a problem while putting the fractions in Google as we discussed above, usually inserting the fractions converts the text into fractions, or either it becomes as simple as it looks like a simple text. Then this tutorial is for you where we will learn an official proper way how to put fractions in Google Sheets. Therefore, this article is going to be very helpful to resolve all these problems which you need to learn. So, let’s start without wasting our time.

How to Put Fractions in Google Sheets

Putting fractions in Google Sheets is not rocket science, even you can use a slash sign on your keyboard to put the fraction but it can take you a long process to convert different decimals and can cause errors. Therefore, here we are going to learn a couple of ways to put the fractions in Google Sheets which will automatically calculate the data and convert it into fractions.

Simply we can put the fraction by using the forward slash sign. But there may be found some problems while directly putting the fractions in Google Sheets.

Just write the numerator and use the forward slash sign and then the denominator. But in Google Sheets, they are usually converted into dates as you can see below. How to Put Fractions in Google Sheets – Using the TEXT function

The TEXT function in Google Sheets allows you to convert a number and text according to a specified format. Similarly, we can use the text function to show our decimals values into fractions.

There are only two arguments in the syntax: first is the applied number, reference cell, or range and second is the specified format in which you want your text.

Here we want to make our values in the form of fractions. There is a specified format in Google Sheets used for putting fractions.

Let’s see how it practically works. This is our sample data in the form of decimals values which we will convert into fractions. Select the cell where you want to put the fraction.

Then we will write down the TEXT function. Then according to syntax first we will give the reference cell address as shown in the image below. Now we have to insert the format that we have discussed above. If your number of lists, then you can simply drag your answer to get the all other’s answers. Here. You can see the change in the syntax, I have just removed the “#” sign which was representing reminder value. Now, you can see the below reminder value has been removed, fractions have just a denominator and numerator. Let’s take some samples of data Select all the values that you want to make fractions. Then follow the following track, Go into the format tab in the menu bar, and then Numbers, you will find the customs number format at last in the drop-down menu. We will write the format of text formatting, In customs number format we will use the same format rule as we study in the above method. Now to apply to the format just click on the “apply” button. As you click on the apply button, all values will automatically be formatted into the fractions as you can see below. Q: How to convert decimals to fractions with the fixed denominator?

A: In some cases, we need to divide our all values with the same divider or denominator, we can do the same thing in Google Sheets as well with just little changes in the format of fractions. Let me show with the help of examples,

Let’s suppose this is our data which we want to divide by fixed divider. Here we have little changed the format of fractions, just write the number in the denominator that you want to use instead of a question mark. 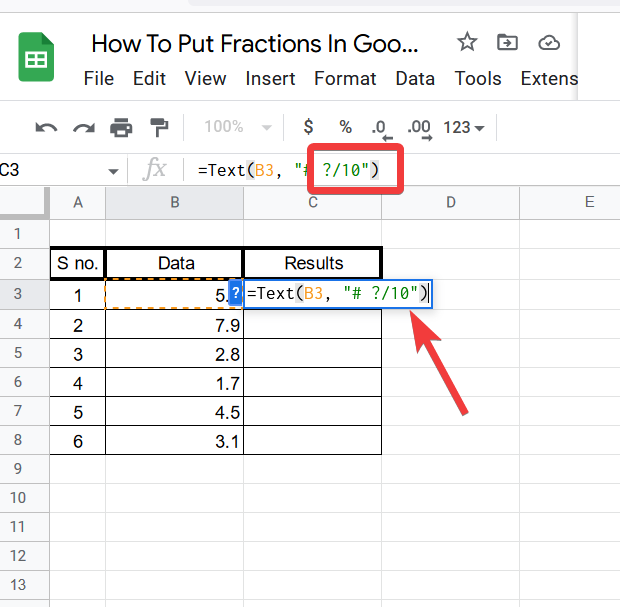 Note: Here we used the TEXT function for converting fractions by the fixed denominators, but it is not compulsory to use the TEXT function, you may use the custom number format as well just use the same format rule.

As you can see from the result, all values have been divided by the “10” Q: How do you subtract fractions in Google Sheets?

A: The Subtract fraction in Google Sheets is the same as subtracting other values. Click on an empty cell, write the first value and use the minus symbol and then write the second value and hit enter, you will get your results.

Q: Can we convert fractions into percentages?

So, I hope this tutorial, on how to put fractions in Google Sheets found very helpful to you for more interesting topics, stay connected with Office Demy.

How to Make Categories in Google Sheets [Guide 2022]

How to Add Axis Labels in Google Sheets [Best Guide]

How to Combine First and Last Name in Google Sheets

How To Remove Page Break in Google Docs (2 Methods)

How to Convert Text to Numbers in Google Sheets

How to Change Bullet Color in Google Slides (Best Practice)

How to Count Words in Google Sheets [4 Methods]