Hello fellows. Today we will learn how to do a T test in Google Sheets. If you are dealing with the statistical analysis for any object and while working on a Google sheet comparing any two samples of data set, then there is a built-in function that is featured in Google Sheets namely the Test function.

What is a T-test in Google sheets?

There are three types of T TEST

In this type of data, we usually have a single set of data in which we examine the value of T TEST. But this example is very rare, usually used to test whether the mean of a population is equal to some value.

If you have different two sets of data from different origins compare whether there are differences or probably not and find the value of T TEST. This type of T TEST is known as Two sample T TEST.

When the quantities of values or numbers are equal in both samples and data set is called Equal variance between two samples T TEST.

When the quantities of values or numbers are unequal in both samples and data set is called Unequal variance between two samples T TEST.

Why we use T-Test in Google Sheets?

How to do a T-Test in Google Sheets?

Let’s take a detailed overview of these types of T TEST step by step with examples.

As we know two samples T TEST is applied in the condition where two different samples are having different values. So here we have an example of two different classes with different scores on which we will determine the T-Test value. Let’s see how to do t test in Google sheets. As we are going to do a t-test, so for t-test we will choose a separate cell to perform a t-test. As you can see below. Now according to the syntax here in the first argument, we will give the range of your first data set. Then give the range of your second data set after inserting a comma. Then the fourth and last argument defines the T-Test type. According to our following data, we have two different samples but an equal quantity of numbers or variance. So, for this type T Test we will use domain “2“. In the example of two different samples or objects, but having unequal variance as shown in the following picture, then we will use “3” as the T Test type domain in the argument. Your syntax was almost complete now just press Enter key is remaining. As you press the Enter key you will get the T-Test value as shown in the following picture. Paired samples T-Test is applicable when there are two different sets of data of the same product. e:g A company made sales in 2021 and 2022. These both sales are for the same company but their sales are different in both years. In this case, we will apply T TEST. Let’s see how to do a t-test in Google sheets.

According to the criteria we have taken the sales value of a product for a couple of years. But these both values are for the same product. As usual, place your cursor in a separate cell to find the T-Test value. Then similarly as previously, provide the range 1 of the data set. You can keep verifying your syntax according to the different colors of ranges. Now the last and important argument of the T-Test syntax to describe the T-Test type, which you can judge by your data. As we discussed above Paired T Test that’s why using argument “1” here. Then here you go with the results just by pressing the “Enter” button. Q: What is the p value in the t-test of the Google sheets?

A: To interpret the t-test results, all you need to find on the output is the p–value for the test. In a t-test, like in most tests of significance, the significance threshold is traditionally set at p = 0.05. It indicates strong evidence against the null hypothesis, as there is less than 5% or 0.05.

Q: How can we check the significance of the t-test in Google sheets?

A: If you check the significance of the t-test in Google sheets, then there is a standard method of verifying the t-test by its significance. The method is very simple. You just need to check if your T-test value is less than 0.05 or not. If it is less than 0.05 then it is “Significant” if not then “Not Significant“. Where 0.05 is the p-value. Here are some steps below in which the process of checking the significance of the T-test is described. Let’s move ahead.

Do you want to check the significance of your T Test value? Ok then just write the P value equal to “0.05” in any nearest cell with the resultant value of T-Test. Here I am using the “IF” function to know whether our answer is significant or not. 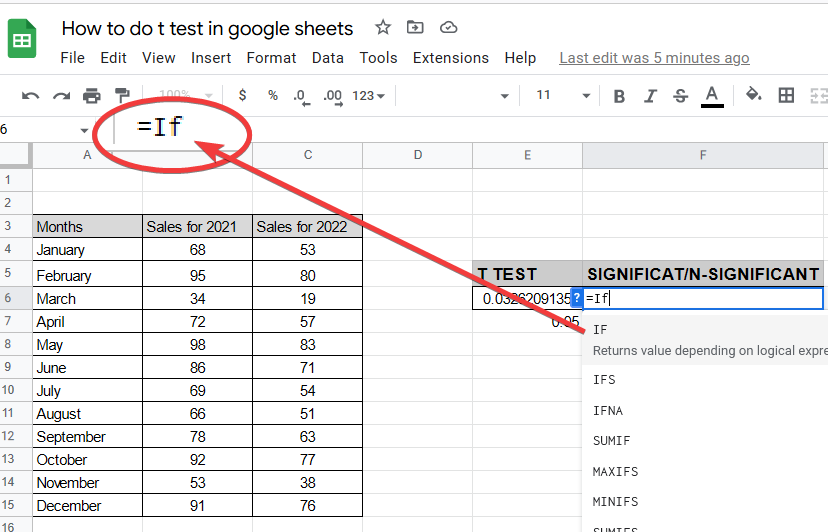 To check the significance of the T-Test value, we need to just check whether our resultant value is less than 0.05 or greater than.

So here we will give the condition as follows. After giving the condition, I am giving the message in our syntax that if the value is less than 0.05 say it is “Significant” and if not say it is “Not significant“.

Further, you can note down the pattern from the following picture. As our T-Test value is less than 0.05, so it is found significant. In this way, you can check the significance of the T Test in Google sheets.

Q: Can we draw a graph in the T-test in Google sheets?

A: Yes, of course, you can draw a graph in the T-Test. Inserting a graph in Google Sheets is very simple. You can draw a graph for your data set in just a few clicks. First, select the data set for which you want to monitor a graph then go into the Insert tab from the menu bar where you will find the Chart option in the drop-down menu. You will get your graph with just one click on this option. Although you can edit and change the graph type from the side pane menu of the graph that appears by clicking on the graph.

Today we learn a statistical concept. We saw and followed a completed process to learn how to do a T Test in Google Sheets. A T-Test is the best solution for drawing quick comparisons, but you may get a little scared at first. Try to make sure that you are getting consonant results by practicing a formula several times.

In this way, these new skills will remain in your mind, and you won’t forget how to do a t test in Google Sheets. I will see you soon with another helpful guide, till then keep learning with us and grow your skills in Google Workspace and Microsoft 365. Thank you!

How to Blend Data in Google Data Studio [Guide 2023]

What does IDLE Mean on Google Sheets?

How to Add Signature in Google Docs (4 Methods)

How to Find Uncertainty in Google Sheets [Complete Guide]

How to Add a Border in Google Docs (4 Methods)